One of the ways I keep Elly fit and strong is using food toys and puzzles. These games are wonderful for working on core and leg strength, balance and proprioception. They are low impact ways for exercise and they challenge her brain, it’s amazing how much a search game or one that really makes her think tires her out!  The video posted below shows a few of the games Elly plays.

I also use the games to work on the fear and the lack of confidence issues Elly came to me with, I’ve never had a more cautious and sensitive dog. When I first got her she would not walk under a chair even though she fit without crouching. She wouldn’t go into tight spaces or even put her nose under the edge of the couch, she was afraid of anything that moved around her and lots of things that didn’t move. When I first started her searching for treats I would make them easily accessible. Once she had the drive to find the treats instilled I started hiding treats where she would be challenged to overcome her fears, easy challenges at first and then I slowly increased the difficulty. She will now willingly go under chairs and put her head under the couch, she will even crawl under furniture!

♥ When introducing a new game use high value treats and make it easy to use or solve to build confidence then up the difficulty level as your pup progresses. I do sometimes ‘downgrade’ the treats to save on calories.

♥ When using a food-dispensing toy I like to put in a few treats that come out easily, a few that take some work and time to get out and a few that are so big she can’t get them out by herself. She will play with the toy for quite a while until she gets out all the treats that will come out. Then she will bring me the toy and ‘ask’ for help and I will make a couple more of the big treats small enough to come out and off she goes again; we do this until the toy is empty. This strategy gets her engaged right away with the easy treats and then her tenacity keeps her working until all the treats are out.

♥ Keep track of how many calories you are feeding with treats and toys and subtract those calories from meals. My almost 14 year old Pug boy Obie, who is just a bit bigger than Elly, is now quite sedentary. BTW- Obie played several games when he was younger to build his confidence and to rehab his two knee surgeries. Now in his mature years he isn’t interested in working very hard for treats so he doesn’t play very often. Anyway- Obie gets almost twice as much food at his two daily meals as Elly because she gets so many calories though our play and training. I’m also careful about the quality of the treats I use since Elly gets lots of her calories from them- I generally don’t use doggie junk food. 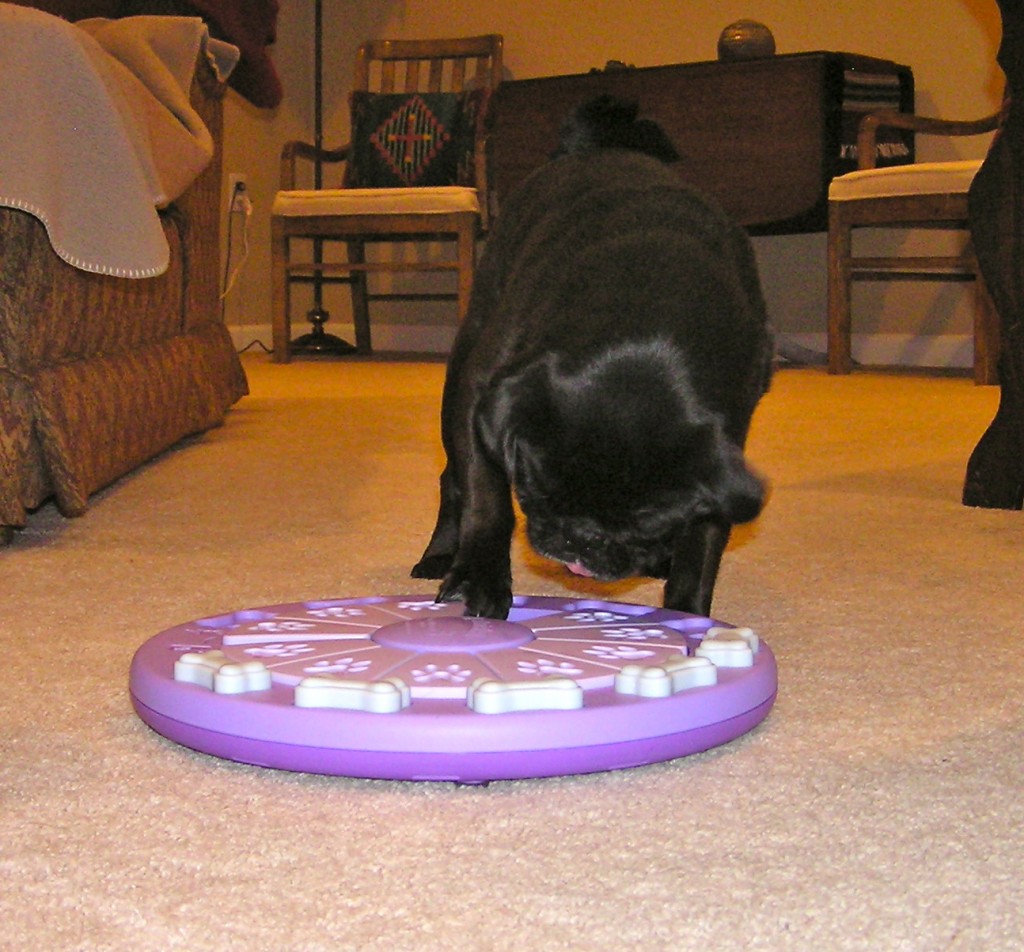 Obie playing Twister back in the day.

♥ Rotate toys in and out of use to keep them challenging and fresh.

♥ Sometimes you have to retire toys altogether if your dog has figured out a way to cheat. Not shown in the video is a toy called Tug-a-Jug which was one of Obie’s favorites. Elly learned to just tip it up on end instead of tugging on the rope as the toy is designed which allowed all the treats to just pour out! 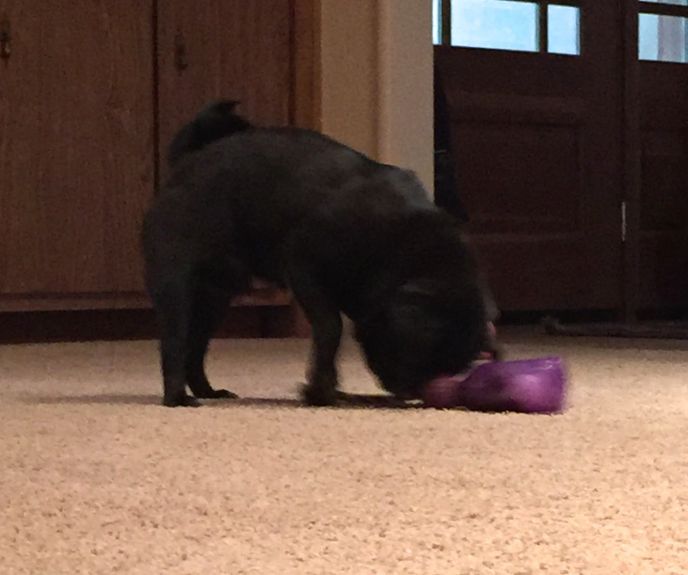 Obie and his Tug-a-Jug

♥ You can use some of these games to feed meals. Elly got her breakfast from the Mushroom toy shown in the video for the first year or so she was with me.

♥ If your dog isn’t getting the multi-task puzzles, when steps have to be taken in sequence, you might try breaking the tasks down and teach one at a time, then move them on to the sequence. For example on the old twister Elly first learned to slide the covers over the cubbies- she figured that out on her own. Then without using the cubbies I added one of the bone shaped pegs and put treats underneath the peg to entice her to lift out the peg. Then I started putting treats in the cubbies and just one of the pegs. Once she got the idea I put more and more pegs in until I was using them all. Some of these puzzles are fun for me because it challenges my training techniques- I have to figure out how to get Elly to understand what she needs to do. 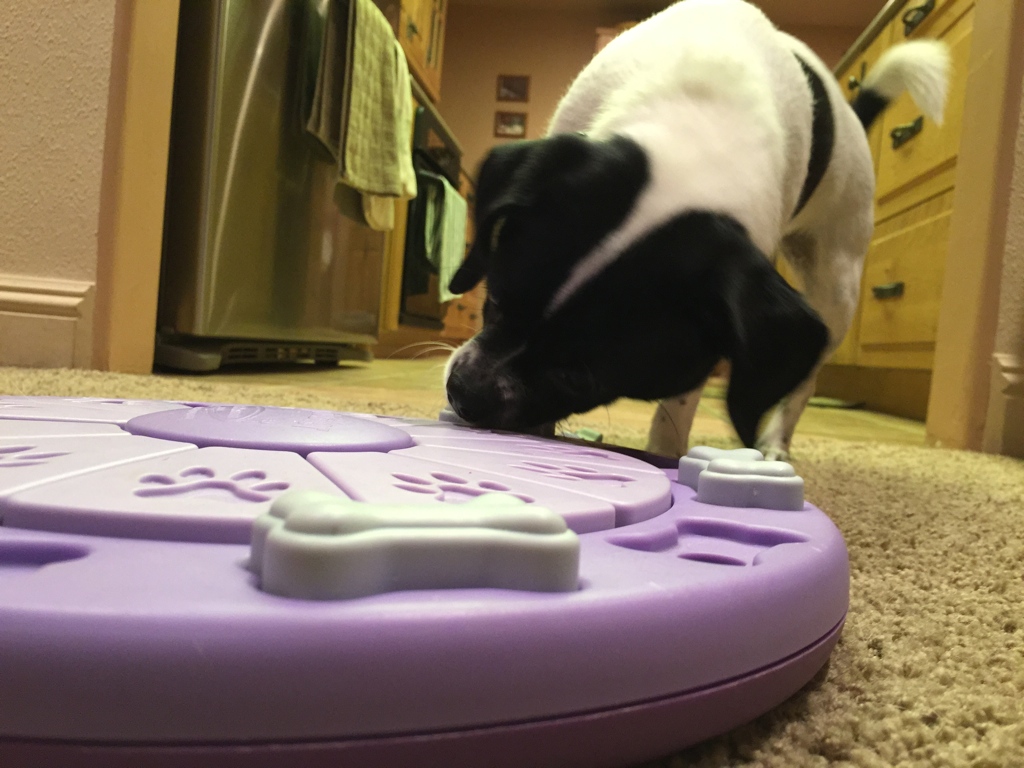 Elly learns to pull out the pegs playing Twister.

♥ Stop playing with a puzzle or toy when either you or your dog gets frustrated. Elly is very sensitive and picks up any frustration I’m feeling and she will start to shut down. Which leads to:

♥ Always end a play or training session on a positive note. Do a simple treat hide or give lots of praise when a puzzle is done. For example: when I’m trying to teach Elly a new trick and she’s not getting it I will step back to a simple trick or behavior like ‘sit’ or ‘high five’ and be sure there are lots of treats and praise so we are both happy and at a positive point when we stop playing.

♥ Don’t make the play session too long especially if your pup is learning a new toy or game. You always want to stop when it’s still fun and leave them wanting more. Instead of a long play session try playing for short intervals a couple times a day.

♥ If you have multiple dogs you might need to separate them during game play unless they can keep to their own toys. My first food dispensing toy experience was with Maggie when she was young. She figured it out pretty quickly and would play often. When Tani came along she was unable to figure out how her toy worked but she found that if she followed Maggie while she played with her toy food would magically appear. Tani would grab the food and a fight would ensue.

♥ Supervision is important especially if your dog destroys toys or might try to eat pieces of the puzzles.

Most importantly HAVE FUN!