For one thing this is my first post in over a year!  But this is about Elly and a weekend full of firsts for her. 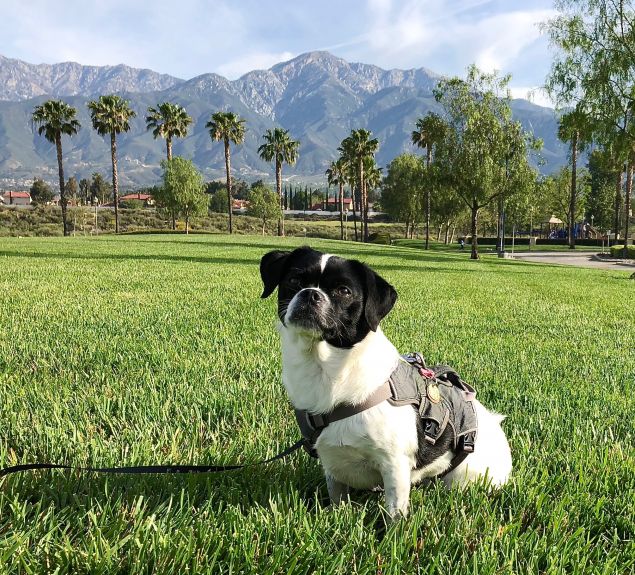 We went to a Nose Work Trial in Southern California on the first weekend in May which was our longest road trip so far, over 6 hours in the truck each way.  Elly has never slept in the truck, she is usually sitting near the center consul so she can touch my arm, it has been this way since I adopted her 2.5 years ago.  But on this trip she did finally take a little nap of about 3o minutes on the way home, probably out of sheer exhaustion!

We stayed two nights at a hotel, the first night she was a little growly when she heard people in the hallway or outside the window but she got used to it pretty quickly.  One funny thing happened in the hallway- we were walking past someone who was knocking on a door and Elly started barking. In Elly’s world no knock goes unanswered!

I also built a road case that we could pack our stuff in and would also function as stairs so Elly could get up and down from the bed by herself (like our stairs at home).  I didn’t get it finished until the day before we left so we didn’t get to practice.  She was hesitant at first but got comfortable with it pretty quick although I had to watch her to keep her from jumping off the bed instead of using her stairs. 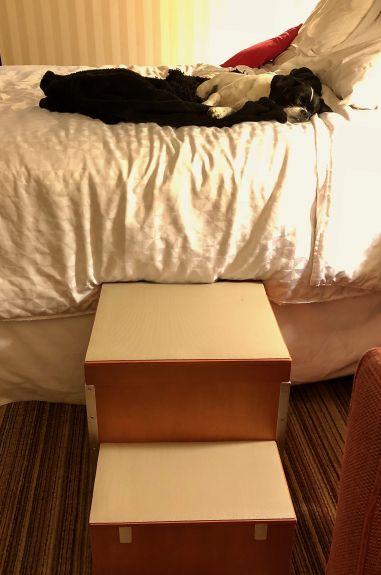 It was pretty warm down there, 90 degrees on Trial day, so I took the cooling vest I got for quad Pug boy Obie.  When you are at a Nose Work Trial your dog has to wait in the car or in a crate next to the car between turns. Elly had never worn it, she doesn’t get as hot as Obie does and I usually wouldn’t have her out for long periods of time when it was 90 degrees.  She wore the vest like she had worn it forever!  Between the cooling vest and a battery operated fan she was very comfortable and not even panting most of the time. BTW- I make what I call our fort in the bed of my truck.  There is an awning over the lumber rack with aluminet shade tarp over the top and covering the sides, this is where we wait together for our turn.  The two pictures below were taken in the fort- I forgot to get a picture from the outside.

Oh- and then there was her first Nose Work Title! She was perfect in four interior searches and earned her Nose Work 1 Interior Title in an Element Specialty Trial.

I am so proud of how far Elly has come, she is far braver and more confident than when we first met.  When we stared nose work over a year ago she wouldn’t put her head into a box or walk under a chair.  If anyone in the room moved or made a sound she would stop searching. She wouldn’t let anyone approach us without hiding behind me.  She also has severe separation anxiety which makes leaving her in the truck between her search turns in class or at a trial problematic. With the help of our trainer we have made great progress with the sep anx.  At first she would flip out when I simply opened the driver’s side door.  We started there and have made incremental but steady progress.  At the Trial I had to go to a pre-brief which took  20 minutes so Elly was alone in the truck all that time.  She was pretty ramped up when I came back but settled down quickly.  Before the Trial the maximum amount of time I had left her in the truck was 15 minutes.  The fact that she recovered from the 20 minutes and was able to do her searches with success gives me confidence that we will continue to progress as we go forward with Nose Work Trials and life in general.

7 thoughts on “A Weekend of Firsts”